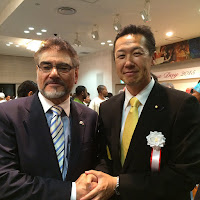 May 25, 2015: It was a great pleasure for His Excellency Ambassador Dr. Fatimie to, despite a very busy schedule, attend the Africa Day reception hosted by the esteemed Ambassador of Lesotho and Chair of the Africa Day Reception Committee 2015 His Excellency Mr. Richard Ramoeletsi.
In what was a splendid event held at the Embassy of Angola celebrating the unity and many delights of the African continent, H.E. Ambassador Dr. Fatimie met with most dignified Ambassadors representing their respective countries as well as with MoFA Japan Chief of Protocol The Honorable Ambassador Mr. Jun Yamazaki and MoFA Japan Middle Eastern and Deputy Secretary General of the governing LDP Mr. Asahiko Mihara who he, on behalf of the people and Government of the Islamic Repucli of Afghanistan, articulated his utmost gratitude to the nation of Japan for their comprehensive and impact generating support for the people of Afghanistan. The Hon. Mr. Mihara showed a great interest in Afghanistan's ongoing developments and promised that Japan would continue to provide its support. After The Hon. Mr. Mihara communicated that he would like to visit Afghanistan again in the near future, H.E. Ambassador Dr. Fatimie ensured that the Embassy was ready to assist in facilitating any future visit. The evening also included warm discussions with LDP House of Representatives member The Honorable Mr. Kikawada Hitoshi.
In what was a great honor, H.E. Ambassador Dr. Fatimie was introduced to the Speaker of the National Assembly of Djibouti the Honorable Mr. Mohamed Ali Houmed who he conversed with in cordial discourse.