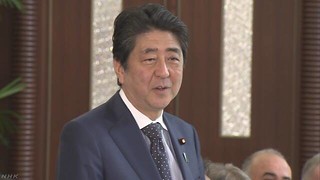 January 8, 2020: It was an honor for H.E. Ambassador Dr. Mohabbat to attend a luncheon for the Japanese-speaking Ambassadors with mission in Japan hosted by H.E. Mr. Shinzo Abe, Prime Minister of Japan, at his official residence in Tokyo.
H.E. Prime Minister Abe welcomed everyone and remarked that Japan was anticipating hosting of the 2020 Olympic & Paralympic Games this coming summer and as such was very much looking forward to the valuable opinion of each country's ambassador to make the games a success. Their Excellencies the Ambassadors from each country who attended gave their opinions about what could help promote Japan as well as the Olympics and Paralympic Games abroad in their respective countries.
In his remarks, H.E. Dr. Mohabbat thanked H.E. Prime Minister Abe for hosting this event and thanked him, on behalf of the people and Government of the Islamic Republic of Afghanistan, for the long support and unwavering assistance of the people and Government of the noble nation of Japan. Further, he suggested that Japan’s incomparable hospitality, called “Omotenashi” would be precisely the chief essential to bridge relations between it and every other country. Additionally, he suggested that as tickets for attendance to each game are already distributed without knowing which country will be participating in each game, it would be hospitable to distribute the competing teams’ national flags within the audience so that they can cheer on the competitors for each country wholeheartedly.
While at the event, H.E. Dr. Mohabbat had the honor of meeting and speaking once again with his peers the other Japanese-speaking Ambassadors with missions in Japan for this annual luncheon hosted by H.E. Prime Minister Abe.