September 28 & 29, 2019: It was a pleasure for H.E. Ambassador Dr. Bashir Mohabbat to attend Global Festa Japan 2019, hosted by Ministry of Foreign Affairs of Japan (MOFA), Japan International Cooperation Agency (JICA), Japan NGO Center for International Cooperation (JANIC) at the Odaiba Center Promenade in Tokyo. Also in attendance were Mr. Naqshband Haya, First Secretary, and Mr. Abdul Hameed Hashimi, Third Secretary, both of the Embassy of the Islamic Republic of Afghanistan in Japan. 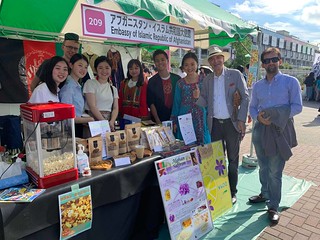 This festival is held annually to explain and display for Japanese and international citizens of all ages about the international cooperation activities carried out by Japan’s government and NGOs, in order to gain more public understanding and support of the necessity for the global development. At the event, the embassy’s Public Relations Office hosted a cultural and food booth in honor of the 100th Anniversary of the Restoration of Independence of the Islamic Republic of Afghanistan in order to introduce Afghan culture, Afghan goods, and Afghan fusion flavors in Afghan Saffron Lemonade and Afghan Saffron Popcorn to those who visited the booth.
On behalf of the people and Government of the Islamic Republic of Afghanistan, H.E. Dr. Mohabbat thanked the people and Government of the friendly and noble nation of Japan through the hosts of the event for their steadfast and benevolent support of Afghanistan over the years as it has striven for progress, prosperity, and peace. Further, he thanked them for bringing such a successful event to the Japanese people and allowing the embassy to partake in the event. In return, they thanked H.E. Dr. Mohabbat for his kind words.
The event was participated in by more than 250 institutions, including Embassies and NGOs, who contributed to the promotion of international cooperation, for the more than 50,000 visitors across the weekend long festival. There were over 1500 guests visiting the Afghanistan booth each day to learn about the many diverse culture aspects of Afghanistan, inquire about its Centennial of Independence, hear of the progress and development made over the recent years, and even purchase Afghan items such as lapis lazuli goods, Afghan saffron, Afghan dried fruits & nuts, and the Afghan fusion Saffron Lemonade And Saffron Popcorn from local Afghan business owners. All of the guests were excited to learn more about Afghanistan, sample Afghan flavors, and were very eager to take home items from Afghanistan.
While at the event, H.E. Dr. Mohabbat also had the pleasure of meeting with several of Their Excellencies the Ambassadors, diplomats with missions in Japan, members of Japanese government, and other distinguished guests with whom he was able to discuss this most successful event.

Attendance at the Global Festa Japan 2019 Festival
Posted by AEJ at 10:40