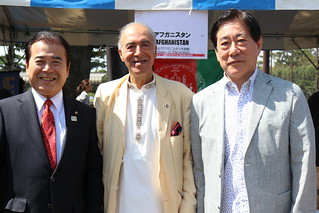 September 22, 2019: It was a pleasure for H.E. Ambassador Dr. Bashir Mohabbat to attend the 30th Mitaka International Festival – “Mishop World 2019” at Inokashira Park in Mitaka City. 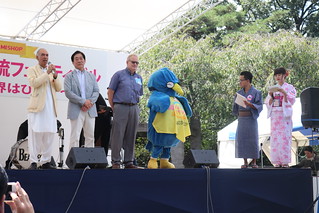 At the annual festival, one of the largest international festivals in the western area of Tokyo, the embassy’s Public Relations Office hosted a cultural and food booth in honor of the 100th Anniversary of the Restoration of Independence of the Islamic Republic of Afghanistan in order to introduce Afghan culture, Afghan goods, and Afghan fusion flavors to those who visited the booth. Prior to the opening of the festival, H.E. Ambassador Dr. Mohabbat was welcomed by his good friend, Hon. Mr. Toshiaki Ito, City Council Member of Mitaka City, who introduced him to Hon. Mr. Takashi Kawamura , Mayor of Mitaka City. On behalf of the people and Government of the Islamic Republic of Afghanistan, H.E. Dr. Mohabbat thanked Mayor Kawamura and the wonderful people of Mitaka for putting on a festival such as this and allowing the Embassy a chance to showcase some of the wonderful aspects of Afghanistan’s culture. 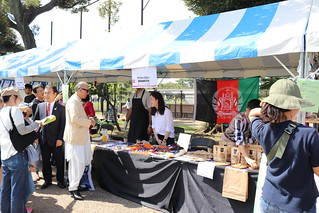 In the opening ceremony, Mayor Kawamura invited H.E. Dr. Mohabbat onto the mainstage to give remarks on the festival. On behalf of the people and Government of the Islamic Republic of Afghanistan, H.E. Dr. Mohabbat thanked the people and Government of the friendly and noble nation of Japan, especially our close friends in Mitaka City, for their steadfast and benevolent support of Afghanistan over the years which has helped it to achieve it Centennial of Independence Milestone Anniversary this year. Further he thanked all those present at the festival for attending the international gathering and invited them to visit the Embassy’s booth to enjoy some of the refreshing Afghan Saffron Lemonade, taste some of Afghanistan’s incomparable dried fruits & nuts, and to see the wonderful jewelry made of Afghanistan’s many gemstones including the national stone Lapis Lazuli. 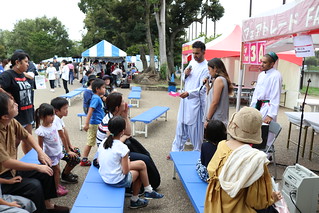 In the afternoon, the Embassy has side stage time to host an interactive “Quiz & Learn About Afghanistan” time with guests where participants had the chance to not only learn about Afghanistan but be rewarded with surprise bags of Afghan dried fruits and nuts. The festival hosted over 10,000 guests in total with well over 1000 guests visiting the Afghanistan booth to try the Afghan Saffron Lemonade, learn about the many diverse culture aspects of Afghanistan, hear of the progress and development made over the recent years, and even purchase Afghan items from local Afghan business owners. All of the guests marveled at the delicious lemonade made by the embassy – which was completely finished-off, and were very eager to take home items from Afghanistan. While at the event, H.E. Dr. Mohabbat also had the pleasure of meeting with several members of the local government to whom he expressed his sincere gratitude for inviting the embassy to host a booth and congratulations for a most successful event. 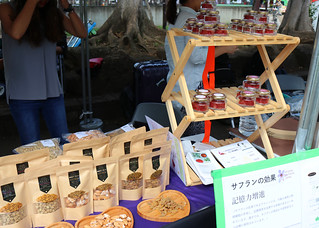