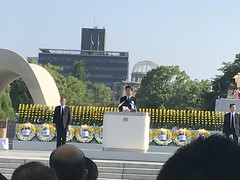 August 05 & 06, 2018: His Excellency Ambassador Dr. Bashir Mohabbat had the great honor to attend the 73rd A-Bomb Anniversary in Hiroshima, Japan.
The evening before the anniversary ceremony, His Excellency attended the dinner hosted by the city of Hiroshima where he had the great honor and pleasure to meet Honorable Mayor of Hiroshima Mr. Kazumi Matsui. Dr. Mohabbat thanked for his invitation to the event and expressed his most profound and sincerest condolences and sorrow to the Honorable Mayor for the passing of the many people during the recent heavy rains which have caused floods and landslides in Hiroshima. In return, Hiroshima’s Mayor expressed his deepest gratitude to Dr. Mohabbat for his kindhearted words and thanked him for attending. 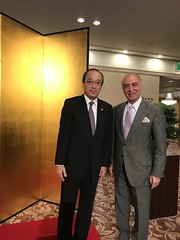 Dr. Mohabbat also had the great honor and pleasure to meet and converse with Japan’s Honorable Speaker of the House of Representative Mr. Tadamori Oshima to whom he expressed, on the behalf of the people and the Government of Afghanistan, gratitude for the steadfast support and Japan's essential role in further developing Afghanistan. 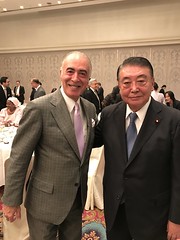 Also, during the ceremony, H.E. Ambassador Dr. Mohabbat had the chance to express his remorse for the attack during a minute of silence to remember the victims of the Hiroshima atomic bomb attack. Dr. Mohabbat also had the great honor and pleasure to talk to Honorable Mr. Natsuo Yamaguchi, President of the Komeito and other Japanese government officials.