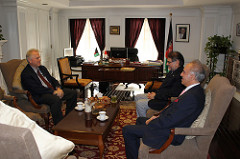 October 24, 2016: His Excellency Ambassador Dr. Sayed Mohammad Amin Fatimie had the pleasure of meeting with Mr. Nicholas Hill, the current Minister-Counselor of the Embassy of the United States of America in Tokyo. Upon invitation from the Embassy of the Islamic Republic of Afghanistan, Mr. Hill kindly visited the embassy and was received with full respects by all of the Diplomats and staff. 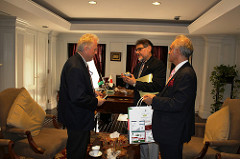 In his meeting with him, H.E. Ambassador Dr. Fatimie took the opportunity to thank Mr. Hill not only for his time but also for the assistance of the United States over the past 15 years in helping to stabilize Afghanistan. Mr. Hill thanked H.E. Dr. Fatimie for his time and expressed his hope for a deepening of relations. They also discussed
topics of mutual interest to both parties.

Following, Mr. Hill also had a meeting with Dr. Bashir Mohabbat, the Afghan Embassy’s own Minister-Counsellor, with whom he discussed many topics of mutual interest. Dr Mohabbat also thanked Mr. Hill for his time in coming to visit the embassy as well as for the sign of solidarity and promises made by the United States at the recent Brussels Conference and the Warsaw Summit earlier this year. Mr. Hill in return thanked Dr. Mohabbat for his time as well, reaffirmed the commitments made by his country in Warsaw & Brussels, and expressed his hopes for continued relations. 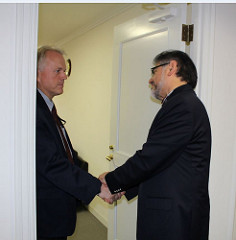