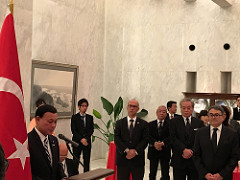 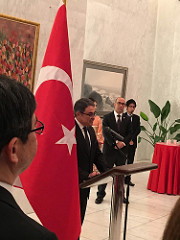 On behalf of the people and Government of the Islamic Republic of Afghanistan, H.E. Ambassador Dr. Fatimie expressed to H.E. Mr. A. Bulent Meriç his congratulations to the people and Government of Turkey for the most auspicious occasion, thanked him for the friendly relations between Turkey and Afghanistan over the years, and thanked him for hosting the wonderful event. H.E. Mr. Meriç thanked H.E. Dr. Fatimie in return and expressed is wishes for ever strengthening relations between the two countries.