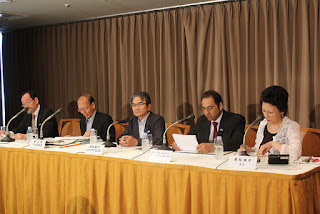 A Press Conference was held at the Tokyo Foreign Correspondents’ Club (FCCJ) to announce the return of Afghan cultural properties that were under the custody of the Japan Committee for the Protection of Displaced Cultural Properties. For this event in which can be seen as a prequel to the exhibition of Afghan hidden Treasures at the Kyushu and Tokyo National Museums, several Afghan diplomats and embassy staff were present.
As H.E. Ambassador Dr. Fatimie was in the city of Hiroshima to attend the 2015 Peace Memorial Ceremony, his message was delivered by Mr. Ahmad Bashir Ghafoori, First Secretary of the Afghan Embassy in Tokyo. By his sides were three experts, heads of organizations which played an important role in this cultural recovery by their knowledge and their action: Mr. Yoichi Inoue, Director of Curatorial Planning at the Tokyo National Museum; Mr. Noburo Noguchi, Director-General of the National Federation of Unesco Associations in Japan; Pr. Ryohei Miyata, President of Tokyo University of the Arts.
In his speech, Mr. Ahmad Bashir Ghafoori stressed the importance of Japan’s help to the Islamic Republic of Afghanistan in order to protect these “cultural refugees”. Tribute has also been paid to the late Pr. Ikuo Hirayama, Goodwill Ambassador of UNESCO at this time, who initiated the activity of protecting displaced Afghan properties. 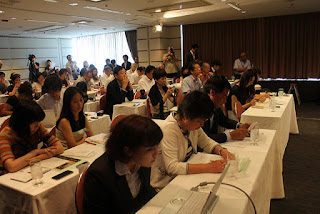 In the framework of an international campaign, a few months ago, H.E. Ambassador Dr. Fatimie delivered a speech named after the campaign: “Do Not Forget Afghanistan”. As the people of Afghanistan does not want to be forgotten, and the recent meaningful changes in the country not to be eclipsed, Afghans will never forget the help brought, being brought and to be brought by Japan and its citizens. This press conference was another occasion to spread this message.


Indeed, many journalists were presents – more than forty – representing various media, newspapers and TV companies. After the information given by the talented speakers, a question and answer session was held.
Posted by AEJ at 01:00