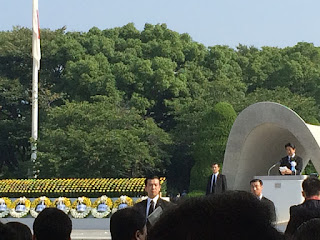 There are things in human history talking about which we quickly feel a lack of words, maybe because these are things that could never have been imagined by those who, throughout history, constituted our languages. Disaster, calamity, tragedy, catastrophe, woe? It is probably this linguistic shortcoming which caused the man who designed the weapon the World commemorated the first and only use to employ inappropriate words when he saw the first test.
On Thursday, August 6, 2015, at 08:15, that was exactly 70 years that the atomic bomb exploded 600 meters above the city of Hiroshima, taking away 80.000 lives instantly, and thousands more in the following days. This anniversary, for which the city of Hiroshima organizes each year a crucial ceremony, is not an opportunity to accuse one side or another, it is a chance given to the World to remember that this must never happen again anywhere.
Thus, it was an utmost honor for H.E. Ambassador Dr. Fatimie to be present at the Peace Memorial Ceremony. This ceremony was absolutely commendable as it aimed to come together for the victims – to look at the past – in order to contribute realizing everlasting peace – to build a safer future. H.E. Ambassador Dr. Fatimie shared the assistance’s aspiration for unending peace on behalf of the government and the people of Afghanistan, but also personally given the very human aspect of the ceremony.
This ceremony is also to remind to the World the imperious necessity of peace as wars only bring calamities, sadness and sorrow. Afghanistan and Japan have more in common than what people usually think – this is something H.E. former Ambassador Haron Amin, may he rest in peace, masterfully demonstrated in his book Lands under the rising sun – and one example of that is the fact that both countries have the uncountable value of peace carved in their history. 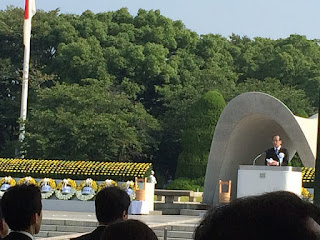