20/08/2015 H.E. Ambassador Dr. Fatimie and Mr. Karimi meet with the Honorable Member of the House of Representative Mr. Toshihiro Nikai 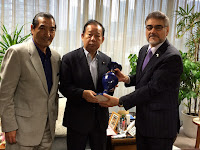 
H.E. Ambassador Dr. Fatimie, and Second Secretary M. Yasir Karimi, had the honor of meeting with the Honorable Member of the House of Representative Mr. Toshihiro Nikai, Chairman of General Council of Liberal Democratic Party, at the party headquarter. It was a pleasure to be accompanied by Mr. and Mrs. Matsunami, president of Japan-Afghanistan Friendship Association. H.E. Ambassador and the Honorable Mr. Nikai communicated mutual interests of both countries, such as World Tsunami Day proposal of Japan to the next session of the United Nation General Assembly, and “Afghan Hidden Treasure Exhibition” in Japan scheduled early next year.
Posted by AEJ at 01:00