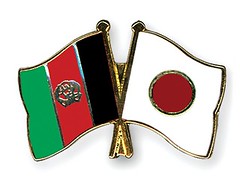 July 27, 2018: Second Secretary and Head of Cultural Affairs for the Embassy of Afghanistan Mr. Agah had the great pleasure of meeting with Sport for Tomorrow in Tokyo, which is a Japanese initiative that aims to bring sporting values to all generations around the world through various programmes.


Mr. Agah had the fortune of speaking to Deputy Director Mr. Koji Nakahira, Senior Specialist for Olympic and Paralympic Games Division Mr. Masahiro Msaunaga, and Olympic and Paralympic Games Division Specialist Mr. Akito Hamada from Sport for Tomorrow. Mr. Agah thanked Sport for Tomorrow for hosting him at their offices and in return the delegation thanked Mr. Agah for his interests and his time. At their meeting Mr. Agah was able to learn more about the initiatives and the positive contributions they could have for Afghan sportsmen and sportswomen. As such, the Second Secretary expressed interest in adding Afghanistan to the program which is overseen and managed by the National Federation for Sport in Japan. Meetings to facilitate this request are being scheduled with the hope that this partnership can come to fruition.