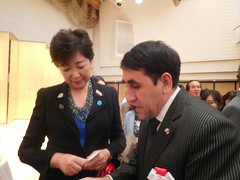 July 19, 2018: First Secretary & Head of Political Affairs of the Embassy of the Islamic Republic of Afghanistan Mr. Basir Hamdard had the great pleasure and honor to attend the Inauguration Celebration for Tokyo’s Metropolitan Assembly’s New Chairman Mr. Ozaki Daisuke at the Keio Plaza Hotel in Tokyo. The Inauguration celebrated the election of Mr. Ozaki Daisuke to become the next Chairman of the Tokyo Metropolitan Assembly which is the prefectural parliament of Tokyo. During the event, Mr. Hamdrad had the great honor and pleasure to meet Governor of Tokyo Ms. Yuriko Koike with whom Mr. Hamdard had a conversation about the recent heavy rainfalls in eastern parts of Japan which caused flooding, landslides, and left hundreds of people dead. Accordingly, Mr. Hamdard expressed his deepest condolences to Governor Ms. Koike and the people affected by the disaster. He also expressed his support by sending courage from the Embassy of Afghanistan to the victims of the disaster. In return, Governor Ms. Koike expressed her thanks to Mr. Hamdard and assured him that his and the Embassy’s support are of great importance. Mr. Hamdard also had the great pleasure and honor to meet and conversate with Mr. Ozaki Daisuke to congratulate him on his new position as chairman; for which Mr. Daisuke thanked him. Mr. Hamdard also had the great pleasure and honor to meet with Mr. Nagatomo Yoshiki, Mayor of Chifu City in Tokyo and President of the Tokyo Metropolitan Assembly, Mr. Taro Shirato, Tokyo Metropolitan Assembly Member and Olympic and Paralympics Promotion Special Committee Member, and Mr. Emoto Shigeru, Minato City Assembly Member.

Mr. Hamdard truly enjoyed the celebration due to the informative and vibrant discussions and conversations he had with other attendees. He also enjoyed the given speeches by Mr. Daisuke, Mr. Shirato, and Mr. Shigeru themselves. Mr. Hamdard also invited Mr. Shirato and several other Tokyo governmental officials to give the Embassy of Afghanistan a visit in the near future. In return, Mr Shirato as well as the governmental Officials thanked Mr. Hamdard for his kind words and kindly accepted his invitation to visit the Embassy soon.

Mr. Hamdard additionally had the opportunity to meet and talk with several distinguished guests such as Tokyo Assembly and National Parliament Members, governmental officials, and diplomats from several missions to Japan who attended and celebrated the inauguration of Mr. Daisuke.