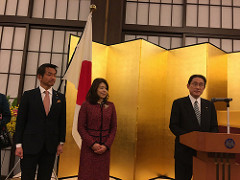 December 22, 2016: It was an honor and pleasure for H.E. Ambassador Dr. Sayed M. Amin Fatimie in attending the reception in celebration of the birthday of His Majesty the Emperor hosted by H.E. Minister for Foreign Affairs of Japan Mr. & Mrs. Fumio Kishida. The reception was attended by the highest ranking officials of the Foreign Ministry, including H.E. Mr. Nobuo Kishi, State Minister; H.E. Mr. Kiyoshi Odawara and H.E. Shunsuke Takei, Parliamentary Vice-Ministers; H.E. Ambassador Mr. Kaoru Shimazaki, Chief of Protocol; H.E. Mr. Tsukasa Uemura, Director-General of Middle Eastern and African Bureau; as well as dozens of honorable Members of Diet and Their Excellencies Ambassadors. 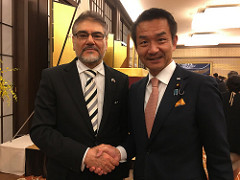 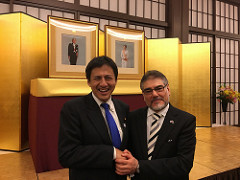 H.E. Ambassador Dr. Fatimie had the pleasure of meeting and exchanging words with some of the mentioned attendees including H.E. Minister Kishida, and expressed by representing Afghanistan the sincerest congratulations as well as his great pleasure for attending the celebration for such a auspicious occasion and the national day of Japan. Additionally H.E. Dr. Fatimie extended his wishes for the peaceful & prosperous future development of the country. In return, H.E. FM Kishida and Their Excellencies all appreciated H.E. Dr. Fatimie’s kind words and attendance.