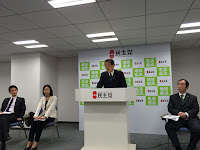 April 22, 2015: Afghanistan has been benefiting from the increasingly robust relations it shares with both major parties in Japanese politics and it was with the goal of further strengthening such ties that His Excellency Ambassador Dr. Fatimie attended the opposition's Cafe Democrats exchange forum. Opening remarks were made by the DPJ's Director General of the Internal Department The Honorable Mr. Yukihisa Fujita, which was followed by the Chair of the Diet Committee The Honorable Mr. Yoshiaki Takaki speaking regarding the DPJ's agenda over the coming months. Moderated by member of the House of Councillors The Honorable Mr. Michihiro Ishibashi, the briefing session provided valuable insights into both domestic and international policies.
H.E. Ambassador Dr. Fatimie, on behalf of the people and Government of the Islamic Republic of Afghanistan, expressed his utmost gratitude to Their Honorables Mr. Fujita, Mr. Takai and Mr. Ishibashi for their generous and steadfast support for Afghanistan's development. Director General The Honorable Mr. Fujita promised that Japan would continue to support Afghanistan and, symbolic of the strong friendship that has been ever increasing in recent years, accepted an invitation by H.E. Ambassador Dr. Fatimie to visit Afghanistan in the near future.