April 22, 2015: Palestine is a key focal point in global consciousness and Afghanistan always does its utmost to support its Palestinian brothers and sisters. As a world power, Japan has global influence and His Excellency Ambassador Dr. Fatimie spent considerable time persisting to assist Palestine when attending a ceremony to commemorate the start of the mission of Japan's Ambassador to Palestine His Excellency Mr. Takeshi Okubo, who previously served with the highest of distinction as Japan's former Director of Afghanistan Assistance Planning Division. H.E. Ambassador Mr. Okubo consequently attained the fervent admiration of the people and Government of Afghanistan. 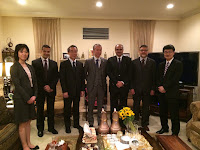 Also present at the ceremony was Ambassador in charge of Japan's Cultural Exchange and former Ambassador to Afghanistan His Excellency Mr. Hideo Sato, Associate Professor Dr. El-Moamen Abdalla, and The Asahi Shimbun's Foreign News Editor Mr. Tsutomu Ishiai, who H.E. Amabssador Dr. Fatimie all spent time with, amongst others, to, on behalf of the people and Government of the Islamic Republic of Afghanistan, promote Afghanistan's national interests.