H.E. Dr. Fatimie is Interviewed in the Mainichi Shimbun. 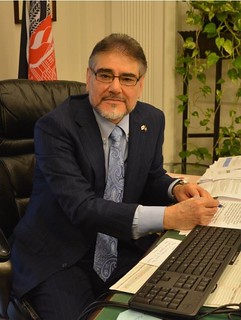 January 7, 2017: H.E. Dr. Sayed M. Amin Fatimie's Interview with the Mainichi Shimbun's reporter Mr. Daichi Matsuoka was featured in print. The translation of the interview originally in Japanese is as following:
Hope is just the way to “peace”. The pen is needed more than the gun, continued assistance required to achieve these objectives.
Afghanistan has been facing conflicts since the invasion by former Soviet Union in 1979, internal conflicts afterwards, and US airstrikes in 2001. We interviewed Dr. Sayed Mohammad Amin Fatimie, Afghan Ambassador to Japan, about the current condition of Afghanistan and his hope for Japan, as well as the NGO Karez, etc.
--- The terror attacks are continuing in Afghanistan. What do you think is/are the cause?
Afghanistan, geographically, is located where terrorists such as Taliban are easily assisted by the neighboring countries and regional actors. There is no doubt that the terrorists are trained in the neighboring countries, and receiving military supplies. There are terrorist “factories” producing arms and terrorists located just outside Afghanistan. As long as these “factories” exist, the terrorists will exist, and the lives of innocent Afghans will be lost. If the neighboring countries would stop supporting the terrorists today, there would be peace in Afghanistan right away.
---Where exactly are these "factories" that Your Excellency is referring to?
In neighboring countries that have been supporting the Taliban for a while. You may know which countries I’m talking about.
---NGO Karez has provided medical and educational support. How do you see their activities?
Their activities of helping medical and educational sectors are fantastic. Dr. Reshad, the president of the group, is consistent and his leadership is great. The life expectancy of Afghans has been improving and this is partly due to the achievements of NGO Karez. I wish everyone who supports Karez the happiness of knowing it's successful efforts are working and wish them further success.
---What do you expect Japan to contribute for the reconstruction of Afghanistan?
The ultimate goal of Afghanistan is to bring peace through peace negotiation (with Taliban). Both peace and development are needed, and Japan has been supporting proactively the both sectors. (Since 2001 Japan has been one of our most steadfast friends in securing peace, prosperity, and stability) Peace and development are like the two sides of the same coin. If there is no peace, then development will not be achieved.
---Afghanistan is not a topic usually talked about in Japan. What is needed for it to gather the attention of the nation?
I sincerely wish that the media would focus its coverage on the exponential progress Afghanistan has made in its reconstruction of infrastructure and society. It is not hard to imagine that without all of the attention media focuses on the news reporting rocket missiles, poverty, or terror, Afghanistan might sound boring. However it is worth noting for all to see that Afghanistan has made huge improvements in some sectors such as female presence in school enrollment. Around 2001 it was just about 0%, but now has rose to 38%. In the health sector, quality of life has drastically improved and infant and maternal mortality rates have decreased significantly.
Education, like that which Karez supports, is the foundation for the country. We do not need kalashnikovs. We need pens with which to learn. Please continue to support us, do not forget about Afghanistan.
Please Click Here to go to the Original Article
[interviewed by Daichi Matsuoka]