December 14, 2015: His Excellency Mr. Ahmad Zia Massoud, the President’s Extraordinary Representative for the Reform and Good Governance, and former Vice President of the Islamice Republic of Afghanistan, has been on the official visit to Japan. In honor of his excellency’s visit, H.E. Ambassador Dr. Sayed Mohammad Amin Fatimie hosted a dinner reception at the embassy of Afghanistan in Tokyo. 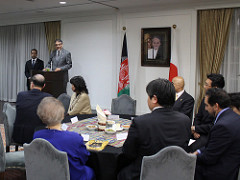 The reception started by the opening remarks of H.E. Ambassador Dr. Fatimie. It is such a great honor and pleasure to welcome H.E. Zia Massoud in Japan, who has been playing such a critical role to plan and implement the course of the country, and the key person with regards to the relation with Japan concerning the achievements of Tokyo Conference on Afghanistan held in 2012 and its follow up. 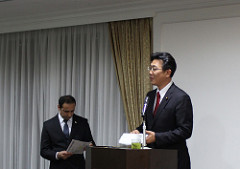 The embassy had an honor and pleasure to have a remark delivered by the Honorable Mr. Shohei Okashita, Member of the House of Representatives, on behalf of the Honorable Mr. Toshihiro Nikai, Member of the House of Representatives and president of Japan-Afghanistan Parliamentary Friendship League. Mr. Okashita noted that it is wonderful to welcome H.E. Zia Massoud in Japan, and wished two earthquake-prone countries, Japan and Afghanistan, would cooperate and the relation will be greater. 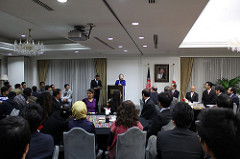 It was also a great pleasure to have Madam Sadako Ogata share her remarks. She expressed her warm welcome to H.E. Zia Massoud, and shared her view of Afghanistan where she once had worked closely, stating “Afghanistan has such a great culture, beautiful terrain, potentials and people have been empowered” therefore she encouraged to carry on the progress. Dr. Asadulla Azam, president of Afghan students union in Japan, also expressed his greetings and welcome to H.E. Massoud, as well as shared his experience and gratitude for the educational assistance by Japan.

H.E. Mr. Massoud expressed his gratitude for all the attendees at the reception, as well as extended his appreciation to H.E. Ambassador Dr. Fatimie and the embassy for the reception. His Excellency Massoud stated that despite many challenges the country has faced and still is facing, it is moving forward to a positive direction. H.E. Mr. Massoud also added his appreciation for the assistance by Japan, and it has been an inspiring trip to have come, observed and communicated with counterparts. 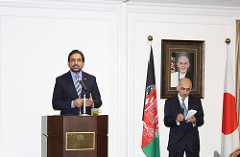 The reception was attended by many distinguished guests including the Honorable Mr. Toru Miki, Member of House of Councillors; H.E. Mr. Hiroshi Takahashi, Ambassador of Japan to Afghanistan; the Honorable Mr. Masaaki Takei, Mayor of Minato-ku; Mrs. Kuniko Matsunami, Executive of Japan Afghanistan Association; Mr. Masami Zeniya, Executive Director of Tokyo National Museum; and many more from Foreign Ministry of Japan, Minato-ku, and Afghan students and residents. Afghan dishes were served for all, and it was concluded very successfully with H.E. Mr. Massoud conversed with all Afghan students and guests attended. 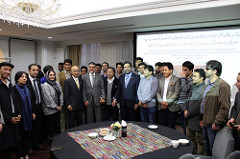 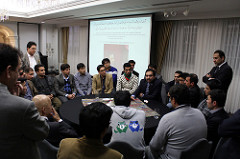 The embassy of Afghanistan in Tokyo, Japan extended the support for H.E. Mr. Zia Massoud’s visit, under the leadership of H.E. Ambassdor Dr. Fatimie, and wishes the best and success for H.E. Mr. Massoud’s a week-long official trip to Japan as well as it help continuously maintaining the good relationship between Afghanistan and Japan. 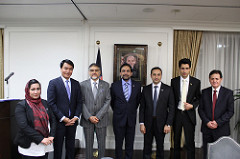